August 14, 2016
With about 10 whole dollars left in my checking account, I picked out two fantasy novels under $5 on Nook. The Greenstone Grail was one of them.

Let me just start out by saying that I have no idea what to think of this book.

I've spent the last week trying to think of what to say for this review, so...here goes, I guess. I'm going to rate it 3 stars because it was interesting enough to keep my attention, but it confused me, and I probably won't return to the book. Maybe the sequels.

Chased by dark shadows to a quiet English village, single mom Annie finds unexpected shelter in the home of the unflappable local historian who seems to have been around forever. Her son Nathan grows up there, sheltered by people and beings who, unbeknownst to him, have marked him for a great destiny. When he discovers the legendary Grimthorn Grail in the woods, he sets off a chain of events that ripples across universes.

Congratulations to The Greenstone Grail for being the sole King Arthur adaptation I've read that I didn't despise. I loathe the Arthurian mythos.

But this was a sort of...sci-fi fantasy set in modern times adaptation of King Arthur and the Holy Grail. The premise is that magic in a parallel universe has become poisoned and is gradually destroying all life in that universe. Only the Grail, the Sword, and the Crown can create a Great Spell to save that universe, but they were split up to protect them until the time is right.

The Grail, locally known as the Grimthorn Grail or the Greenstone Grail, is hidden on Earth to protect it from radicals in the alternate universe. Legends have sprouted up around it over time, including the Holy Grail legend. Meanwhile, several earthly factions desire the Grail as well as the aliens.

Yes, there are aliens. Aliens who ride dragons. They're actually pretty well done.

I assume that the cover designs of the various editions are trying to "sell" the Grail legend, since it is called the Sangreal Trilogy. But this book has aliens riding dragons. OK, so they're flying lizard things called "xaurians" but still, basically dragons. Why the hell would you not include a dragon on your cover?

Genre? I don't even know

Science fantasy or just "Arthurian adaptation" is probably the best label for this. I can live with that, although it doesn't quite seem to do the book justice.

But who the hell is the target audience? There are kid and adult viewpoint characters. The tone feels decidedly middle grade...until you get to a random "fuck" dropped halfway through the novel. Writing style, characterization, relationships, even plot all seemed geared towards younger readers...until they aren't. The tone and style are inconsistent.

Which may be fine for an adult reader. Personally I love MG fiction, but I prefer to read MG written specifically for kids rather than a book for adults which feels like it's been simplified in parts just in case kids happen to read it. And if you want to know whether you can recommend The Greenstone Grail to a kid -- if it's even intended for kids, or what -- I have no idea.

I couldn't help thinking to myself, "Diana Wynne Jones did it better." She also has a series featuring a schoolboy who can dimension-walk in his sleep, but her books strike that balance of being for kids as well as adults. While maintaining consistency of tone and style, and without speaking down to the reader. (While also managing to write an Asia-based fantasy culture that isn't super offensive...more on that in a second.) 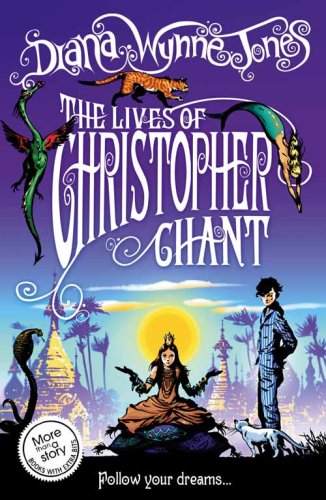 Nathan can travel to different worlds and universes in dreams. Often, dream sequences are a serious pain to read (and write) but Nathan's dreams are done skilfully and fall naturally into the wider narrative.

The parallel universe is also neat, even though we get glimpses rather than long looks. The aliens are humanoid, with slightly altered features from those of Earth. They have to wear masks because the sun has been polluted and light will burn them. What with the deadly sun, immortal aliens, and a chalice full of blood at the center of the plot, the whole thing takes on a vampiric flair.

The book definitely left me wanting to know more about the Grandir -- the mysterious puppetmaster controlling the various worlds in two universes. He has some sort of grand plan to save his universe, but we don't know what that is. He has a paramour, Halme, who is also his sister (I know, gross -- but this is an Arthurian adaptation).

Halme is portrayed as this Helen of Troy type of beauty, a very passive person who is tired of her immortal existence. In a twist, she takes unexpected agency and becomes hugely important in the end of the book -- while her mysterious brother/lover remains in the shadows.

I really wanted to love this book, OK? It had dragons.

But in addition to all the problems outlined above, I had further reservations. Nathan is first introduced as a mixed-race white and Indian Asian kid, with dark skin and hair. However, we soon learn that his conception was supernatural. So much for representation; he was fathered in a different universe. A universe where, we later learn, all the aliens look vaguely Asian.

The book goes on about how advanced their society is and how beautiful Halme is, and how the aliens look a bit like certain Asian ethnic groups on Earth. And then, completely oblivious, the author refers to "Orientals" when describing what Nathan looks like.


The Greenstone Grail leaves a maddening number of loose ends. Forget audience and genre -- I still don't know what the fuck even happened at the end. What was that resolution? What next? What the hell is going on? Who are the bad guys, even? Someone please tell me. I am going to read the damn sequel just to find out, which I suppose is a plus for the author.

This book had a girl with an abusive father...and she didn't forgive him.

I could have done cartwheels. I could have cheered. Pretty sure I did a small victory fist when she called for help after the guy started beating on her mom. You go, kid!

And when Nathan tries to give her the old "He's still your dad" line, she sharply reprimands him. When someone dies suspiciously and her father has a motive, she doesn't try to protect him. You get the sense that she probably wants a decent father and is depressed about the relationship. But she hates her abusive father and makes that 100% clear.

Seriously, what the fuck is it with authors who feel the need to spin the Hallmark-channel-approved "character must forgive an abuser or if not, reconcile themselves to loving them anyway BECAUSE FAMILY IS EVERTHING" bullshit into their narratives? Like, no? Why must characters always let toxic people back into their lives just so the author can get that feel-good resolution? Why can't people realize that writing narratives where "you have to love them/forgive them because they're family" could do actual harm to an abused kid reading one of those books?

Hazel from Greenstone Grail is a rare and much-needed exception.

3 stars. Do I like it? Do I hate it? I still have no idea. I'm so annoyed I need to read the sequel just to figure out what is going on with this book. And series. And everything. Ugh.