April 20, 2014
Hello! I'm back from my blogging hiatus. I've been on a horror kick lately, and most recently, I watched the first two episodes of Netflix's Hemlock Grove. I'm a bit late to this series, but for what it's worth, here's my review. 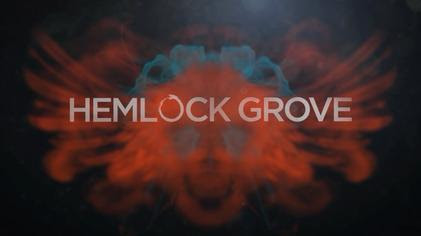 It's based on a novel, and you can tell. Once the show introduces something that might be interesting or lead to tension and conflict, it snatches it away like a precious plot-gem that it doesn't want you to see. There is way too much exposition and filler. The plot hangs together pretty well, but not much really happens.

Case in point, it should not have taken two whole episodes to find out Main Character is a werewolf. Especially since everyone seems clued into this fact and accepts it as truth -- except the viewers. Then suddenly Rich Boy is asking if he can watch the transformation like it's understood that Poor Kid Main Character is a werewolf. No warning, no lead-up, nothing. The show did spend a lot of time working in hints that Rich Boy is a vampire, such as...

Rich Boy vampire gives oral sex to a girl on her period in the bathroom stall of their high school. Yep. That happened.

Hemlock Grove has the feel, writing, and characters appropriate to a teen paranormal romance show. The sex, adult characters' storylines, swearing, and other attempts to make it "edgy" and "adult" feel out of place. For the most part, the sex and violence happen offscreen or just out of the shot. It's all pretty tame stuff, giving the flavor of horror without actually showing it -- like you'd expect in a show targeted towards a younger audience. Just enough to make them feel cool for watching more adult content; not enough to tick off their parents.

So in the few scenes with explicit content, it's like, "Wait, what? Where is this coming from?" It's inconsistent with the feel of the rest of the show. It's like a teen paranormal show that has slasher aspirations but is too scared to go all the way.

Hemlock Grove could have had great success if it had been conceived as paranormal show for teens. "Rich vampire kid teams up with poor werewolf kid to solve a mystery killing in their small town" is classic YA paranormal. Even the casting seems appropriate. Most of the characters are high schoolers with high school problems. The MC's are two hot boys who give each other long, intense looks, have a strange instant connection, and spend a surprising amount of time shirtless or naked. Bringing me to...

Twilight but Without Bella and Edward and Jacob are Bi (Maybe?)

Seriously, this show could not make their relationship more suggestively homoerotic if it tried. Vampire Kid sends Werewolf Kid a note asking, "Can I watch?" He later watches the werewolf transform, completely naked, covered in sweat, moaning and writhing and quite determinedly making intense eye contact with Vampire Kid. By the end, he's covered in blood, which of course Vampire Kid wants more than anything. Stop talking and just make out already.


The only thing is...I'm not sure whether the show intends for there to be homoerotic subtext or a romance between these two. It is entirely possible that the writers did this by accident. I hope not. I want it to go somewhere. Besides, watching Werewolf Kid pity-flirt with Vampire Kid's disabled sister is just uncomfortable, as is Vampire Kid's incest crush on his cousin. But getting to my last point...

I mentioned before that this show is not what it says on the tin. Throughout the first two episodes, there was light gore, offscreen or out-of-shot violence, and nothing that really made you want to throw up. Well, except maybe the oral period sex, but that wasn't shown.

But then the werewolf character slowly and painfully rips out of his own skin to transform. His eyeballs pop out. Wolf teeth grow in, pushing out his human ones. His face rips apart as a werewolf snout pushes its way through. When it's finally complete, the wolf shakes off the human skin and blood like a dog that just got out of the water.

AND EATS IT. He fucking EATS HIMSELF.

You know, I'm not a fan of censorship, but this show gave me NO WARNING that something like that was going to happen. I don't want ratings. I want a "this show has an autocannabalism scene" warning to pop up. Or something. I was NOT prepared to see that and absolutely nothing in the show so far gave me any warning that I should expect that level of gore and JUST FUCKING GROSS LIKE ARE YOU FUCKING KIDDING ME WHYYYYYY.

I guess it makes sense that the werewolf should feed on his own flesh so that he doesn't hunt down humans later in the night. But still, shouldn't he just hunt animals? Like a normal, non-human-eating wolf? Also, there was a MURDER in this town. It's going to look really bad for his mom if the police stumble upon a PILE OF HALF-EATEN HUMAN FLESH AND TEETH in the backyard.

Oh, God. His mom has to clean that up every month. *gag*