YA Friday: Some Good YA Scifi

February 04, 2012
I could be wrong, but it struck me recently that scifi is underrepresented in YA lit. I could rattle off lists of romance, contemporary, paranormal in every shape and size, fantasy, horror, and other genres and sub-genres. But I don't think there has been a really popular YA scifi book out for a while now. I don't count The Hunger Games. Dystopian novels are "in" right now, but dystopia isn't scifi -- it's its own thing.

I happen to enjoy a good scifi novel. So this Friday, I thought I'd do a short list of YA science fiction novels that I or my friends have read and enjoyed. Please feel free to comment on them or add your own!

The Pendragon series (Merchant of Death, The Lost City of Faar, The Never War, The Reality Bug, Black Water, The Rivers of Zadaa, The Quillan Games, The Pilgrims of Rayne, Raven Rise, The Soldiers of Halla) by D.J. MacHale

Pendragon is a ten-book series about Bobby Pendragon, a kid whose uncle is a Traveller -- someone who can travel to different territories, or worlds, through wormholes. Uncle Press drags Bobby away from a basketball game to become a Traveller, and he reluctantly embarks on the quest to save the world. Or rather, worlds.

I liked these books because of the imagination that goes into the territories, each of which are vividly drawn. My favorite character is from a territory completely covered by water. The Never War is set in 1930's Earth. The Quillan Games is the original Hunger Games. And then there are all the great female characters, which make feminist me very happy. The villain, Saint Dane (Saint? Really? I don't think they ever explain why he's called Saint) is also lovely. In an evil way. :) 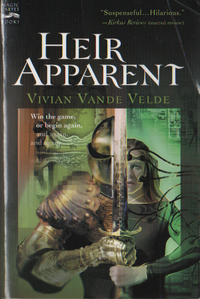 This is a fun romp through a virtual reality fantasy universe. Giannine uses her birthday gift card to Rasmussen Gaming Center, an RPG company, on the day angry parents are protesting the corruption of children. Said angry mob later breaks in and damages the equipment, trapping Giannine in the game "Heir Apparent" so that she can't be unplugged without risk of brain damage. She has to win before the damaged circuits cause brain damage and death. Heir Apparent is one of the most complicated games, with infinite ways to win (or lose). Her character Janine, an illegitimate child of the late king, has been named heir -- over three legitimate sons. One's a muscled thug, one's a werewolf, one's really cute, and they all want her dead. Also there's a dragon...

Yay for being a 90's child! If you've ever played Dungeons and Dragons, World of Warcraft, or basically any other fantasy RPG out there, you will appreciate this. Even if you haven't, Heir Apparent is still fun -- and funny; I like VVV's sense of humor. 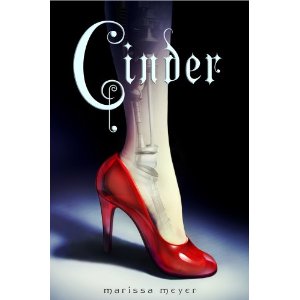 Cyborg Cinderella! Also, it's ironically truer to the original fairy tale than many Cinderella retellings out there. Cinder the cyborg has the usual evil stepmother and wicked stepsister. She also has an assortment of malfunctioning parts -- so it's lucky that she's a mechanic. Skills that come in handy to a certain Prince of New China... 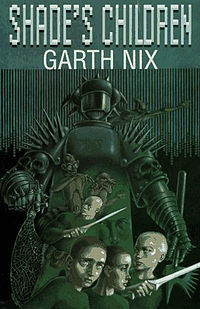 Aliens/beings from another dimension have invaded Earth, killing everyone over the age of fourteen and breeding and harvesting the rest in Dorms for use in their war games. (This is what REALLY happens in college.) There is one adult left on the planet -- Shade, a scientist who downloaded his personality into a computer. He leads a band of escaped children, but his motives are, well, shady.

If you like scifi and horror, this book is for you. To be honest, it gave me nightmares. Hell, it still gives me nightmares. That's not to say I didn't like it, but damn...I can understand why it was banned.

Personally, I hated this one, but I've heard enough people rave about it that I feel I should include it. I mean, it's not bad per se (except when it is). I guess it's the "Let's hit them over the head with a moral hammer!" thing again.

In this future society, a city is divided into two parts: one where people have "surged," or altered their appearance with plastic surgery, and one where they still have the appearance they were born with. The surgery takes place once you come of age, and the people who have surged are called "Pretties" while everyone else is an "Ugly." Pretties are air-headed, goofy, and obsessed with pleasure-seeking. Our heroine is an Ugly who discovers a group of runaways/rebels who are trying to accomplish...something; I'd stopped paying attention at that point.

Decades ago, aliens attacked Earth and were defeated only by chance. Now all the efforts of Earth are focused on preparing for their next attack. Siblings Peter, Valentine, and Ender are child geniuses, but Ender is the one the chosen for Battleschool training. While Ender undergoes grueling training to command the last defense of Earth, Peter and Valentine plot to take over the world via blogs. And it actually works.

I wasn't sure at first whether to include this one, because it's not really YA. However, it is about children, and I know it's commonly read by teens -- in fact, someone in my middle school recommended this, and I've never regretted it. Ender's Game (and its sequels, which are definitely not YA) are on my bookshelf. But apparently Orson Scott Card is kind of a dick, so maybe rent this from the library instead of buying it.