December 22, 2017
Double Exposure is the second in the Violet Hill series of short romance novels set in a queer cafe in Maine. While it's the second in a series, each book can be read as a standalone and you can start anywhere in the series. I picked this one up when it was on sale, and am glad I did!

[Trigger warnings: a character makes an ageist/age-disparaging comment; there's one sex scene; a character mentions past panmisia and rejection from her parents; character describes past queermisia against the cafe] 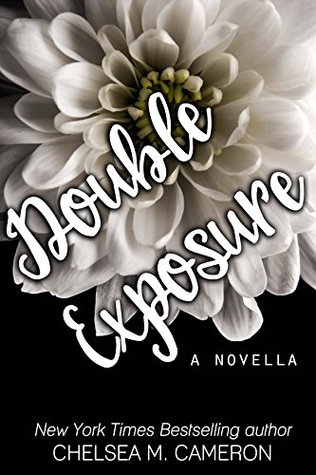 Double Exposure is an extremely heckin' cute meet cute. Anna is a twenty-something working her butt off at the Violet Hill cafe ... when in walks the beautiful photographer Lacey. Instant crush!

Lacey wants to do a piece on the cafe, and she wants to interview Anna. As Anna convinces her media-shy bosses to do the piece, she knows her enthusiasm for Lacey and her work goes beyond professional interest. But Lacey is a travelling photojournalist, and Anna doesn't know if she's ready to commit her feelings to someone who's going to leave.

Characters worrying about money, or, why I am basically Anna in many ways

As a millennial, I found Anna extremely relatable. She is clearly happy where she is, but has an air of being frazzled that I've definitely experienced. She works hard, and while she's settled nicely in Violet Hill, there's this sense that she's frantically moving around and doesn't take much time to enjoy herself because she's so busy. She mentions that as a pansexual woman, she is attracted to people of all genders; however, while she forms crushes easily, she is afraid of forming emotional connections because she's been burned by heartbreak in the past. She's a little shy, a little vulnerable, a little self-conscious.

Of course, Anna can't help falling for Lacey emotionally as well as physically. Lacey is the elegant, traveled, sophisticated woman -- Anna is pretty intimidated by her at first. But when they finally admit their mutual attraction, we learn that Lacey is warm and friendly and funny. She has a black cat named Murder, who I loved. Give a character a cat, and I will love that character.

My favorite thing about this budding romance between the small-town girl and the glamorous out-of-towner was how open and communicative they were. They talked about themselves, their body confidence issues, their work, their boundaries, and what they wanted their relationship to be in a healthy way.

For instance, when they are kissing, Anna stops and confesses that she isn't ready for a serious relationship because Lacey will leave in just a few weeks. They talk about it and set physical boundaries in an attempt to create some emotional distance.

The book then gets into what constitutes a "serious" relationship. Despite their mutual -- and intense -- physical attraction, Anna and Lacey don't have sex until the very end of the book. When one of her coworkers makes a joke about her "fling" with Lacey, Anna replies that it isn't a fling since they haven't had sex. Her coworker challenges that -- does it need sex to be a fling? Why does sex need to be involved for a relationship to be serious or valid?

These are questions which give Anna pause, and I'm glad the book included them. There's definitely a stigma that sex = serious, or that having sex must deepen emotional commitment. Anna and Lacey's relationship demonstrates this to be false -- despite holding off sex until the very end, they develop Serious Feelings and ... well, without spoilers, everything does work out for them in the end. :)

I would say that this book is a low to medium heat romance, with some kissing and one sex scene at the very end. It delves into the questions of emotional and physical boundaries with a sensitivity that I've rarely seen, and overturns the idea that a sex-free relationship is less valid.

Lacey tells Anna that her work as a photojournalist focusing on queer spaces and issues is important to her as a bisexual trans woman. Anna, who had been furtively (and amusingly) trying to figure out if Lacey is into girls, blurts out that she's pansexual. It was a cute scene.

Frequently, books with trans characters resort to insulting tropes to reveal that the character is trans. I was relieved that this was not the case here. Also, Anna does not assume that Lacey being bisexual automatically means that she's into women. This was incredibly affirming to read, as bisexual does not necessarily include or exclude the two main binary genders.

While both Anna and Lacey have body insecurities, Anna does not try to compare her body confidence issues as a cis woman with Lacey's body confidence and dysphoria as a trans woman. At one moment, when Lacey is lamenting the size of her breasts, Anna holds off saying that she thinks they're awesome -- because at that moment, complimenting her partner's body would be more invalidating than uplifting.

Lacey also has some hesitation about whether Anna is OK with her being trans. Lacey is so elegant and confident that that moment of vulnerability was more touching. Lacey talking to Anna about her own body was clearly somewhat difficult for her, and Anna is very supportive and lovely about everything. Some people might view these scenes in a different light, so if you know of any own voices review of Double Exposure by trans women, please let me know so that I can link them here.

Using Xan West's ranking, I would call this a fat-neutral romance. The author has written other fat heroines and love interests in this series (which I am reading now!).

The dialogue is confusingly spaced so that it is hard to tell which character is talking. When formatting dialogue, a new paragraph break should mean a new character is speaking. For instance,

"The soup is cold," Mary said.

I stuck a finger in the soup. "Feels fine to me."

The book did not obey these formatting rules, and that made for a slower read as I spent more time parsing who was talking when. It may hamper your comprehension of what's going on. I wish the books would be re-released with this changed.

The other quibble is the cover. With the somber black and white flower on a black background, I thought it would be a much gloomier read than it was. I'm not sure how much control the author has over these elements, but if I noticed them, others probably will -- so I included them. The book is worth the read, though! Don't let that discourage you! :)

Overall, I would recommend this book. It's an incredibly sweet meet cute. I did not think I could like meet cute romances. I was wrong!