September 09, 2014
A little while ago, I wrote a post inspired by the #WeNeedDiverseBooks hashtag, begun by Ellen Oh (@elloecho). Today's review is Mind Games by Kiersten White, which I chose for its depiction of disabled protagonists. 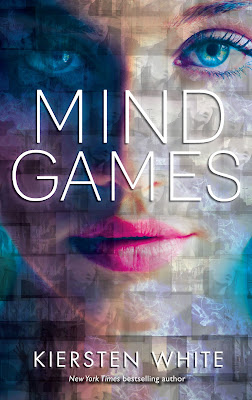 Both main characters have superpowers, but I didn't think it was handled in an insulting way to disabled people. If you think otherwise, please feel free to share in the comments.

Mind Games is a science fiction/paranormal-ish novel about seers, empaths, and mind readers who are controlled by a Big Bad Corporation that uses their psychic talents to its own benefit. Fia is a unique psychic who has the gift of intuition; her gut feelings and instincts are always right. Annie, her sister, is a seer who is blind. Bid Bad Corporation holds Annie hostage to get Fia to spy, steal, and assassinate for them. Meanwhile, they train Annie to spy on Fia, since no other seer can predict her actions.

I didn't like this all that much but hey

Actually, this wasn't my favorite book. Parts were quite good and I loved some of it. Overall, I didn't get a very good sense of the heart of the conflict and I wasn't a huge fan of the plot or even the concept. Its strength was the sister relationship. Annie and Fia, who alternate viewpoint chapters, are well-written.

Part of the conflict is how each sister views the other as a liability that needs to be protected because of their disability. For Annie, this is amplified by being Fia's older sister and needing to look out for her. When their parents were alive, Fia got the rather negative message that it was her job to protect her blind sister (despite being a child who was in no way equipped for this). Both are willing to do extreme, horrible things for the other. Their relationship is a complex, toxic mix of love and resentment. As hostages, they to some extent see each other as obstacles to their freedom.

The trope of the blind seer is a tired one, but Mind Games skirted some of those problems when Annie goes blind at age four, long before developing any psychic powers. When she gets her psychic ability, it isn't portrayed as a substitute or compensation for her disability. She is neither the Best Ever at being blind or the Best Ever at being a seer. In fact, she sometimes struggles to interpret her visions because sight is not her primary sense.

Fia is suicidally depressed with impulsive, self-destructive tendencies. I enjoyed Mind Games's portrayal of her depression because it showed someone who is depressed in an angry way, and I haven't seen that very often. Many people with depression cycle through angry and depressive periods, as does Fia.

I don't think Fia's mental illness is handled as well as Annie's blindness, and this is also where the plot starts to fall apart. The bad guys have empaths and mind readers, but can't treat Fia or see the warning signs. They don't care about the mental or physical health of their most valuable asset and the only known person with this ability. The Big Bad Guys spend all this time manipulating and cozying up to Annie, but let Fia become a suicidal, angry person who hates them all.

They are in fact withholding care from both sisters in order to better control them, but it goes too far to make sense. "Our spy/assassin-in-training does a murder-suicide attempt? Here are some pills and a long vacation without any mental health professionals, adults, or bodyguards! Oh, and we'll send along the (superhot) heir to the company, AND Fia's romantic rival! NOTHING COULD POSSIBLY GO WRONG."

This entire plot could have been solved if Fia had taken Hot Heir (pun intended) hostage for her sister's freedom. Which they gave her ample opportunity and motive to do. But I suppose if they had done the logical thing, there wouldn't be  plot.