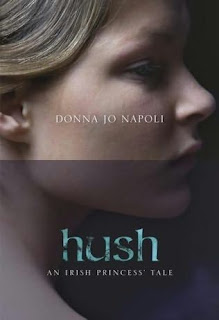 What it's about: Irish princess Melkorka is a young woman with dreams. She is the first daughter of the king and she loves stories, especially tales of warrior princesses. Her dreams are shattered when she and her younger sister are kidnapped by Vikings and sold into slavery, to live amongst people her culture considers to be less than human. To survive, she must change everything she is and everything she knows. In defiance of her captors, Melkorka takes a vow of silence. She might not be a warrior princess, but she finds an inner strength and power in her silence.

Why I recommend it: Hush is based on a true story about an Irish princess who was kidnapped by slavers. Donna Jo Napoli is not afraid to be bleak; Hush is a tough book in many ways because of the brutality of Melkorka's situation. Slavery, rape, abuse, and fear all feature prominently, but they are all handled tastefully.

For me, the best part of the book was Melkorka's character development. She starts out as a naive, sheltered, and privileged girl and becomes a very strong woman. The story also doesn't resort to the princess-with-a-sword type, which is really a superficial way of making a female character look "strong" without any actual development. Melkorka is strong in a more profound way. Through her silence, she forms bonds with her fellow prisoners, inspires a superstitious fascination in her captors, and captivates the man who buys her. She manipulates him into improving her life, but the book doesn't employ a Stockholm Syndrome "romance." She is a true survivor.