January 14, 2015
What's up Wednesday is a weekly blog hop sponsored by Erin Funk and Jaime Morrow.

I also finished Clariel by Garth Nix recently, which was very good. I think Clariel is the first asexual character I've read before in YA. I had to put the book down and jump up with excitement because I had this overwhelming feeling of FINALLY SOMEONE GETS IT JEEZ. 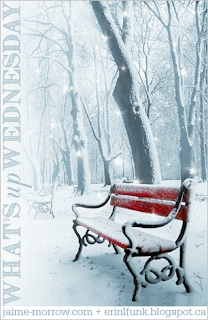 In the meantime, I picked up 14 Books of Fantasy for $0.99, a fantasy anthology by a variety of authors. The first, Blades of Magic, is...meh. The writing tends to be a bit redundant and the main character is a totally unsympathetic, sociopathic, murderous brat. Her father was executed as a traitor, so she goes around murdering everyone who's ever insulted her father. Which includes murdering her neighbor, who has an infant daughter, and gloating about how his daughter will never have a father in his final moments.

And I mean, I can do amoral serial killers, but then this chick goes home all weepy and "Oh woe is me I'm just a little teenage girl whose daddy was killed and I think he was a traitor but I'm murdering everyone who thinks the same thing" and we're clearly supposed to feel sorry for her and think her serial killer habit is just something that makes her a badass. Which is RIDICULOUS. Women don't get a free pass for being brutally violent assholes just because they are women. And then, THEN she was like, "Waaaahhhh, now I have to get a JOB, but if my father was alive, we would still be rich, guess I have to go down to the docks and grub for fish with the PEASANTS OH POOR ME" and I was so done.

Errrr... *guilty cough* The last thing I worked on was a scene in Contracted, which is probably still utter indulgent crap. At least I wrote it. It's been sitting there waiting for me to write it for weeks now.

I am also, very, very slowly reading the stuff my CP gave me months ago. I feel like a jerk.

What else is up with me:

I'm in The Winter's Tale by William Shakespeare with my graduate program, as directed by Lisa Wolpe. She is a famous director, and we are very fortunate to have her. My "statement of interest" for this audition, which was just to send my resume and headshot, was basically "please just put me in I will be over the moon to have anything." So I'm the character who's in a lot of crowd scenes and I have one line (they had to cut the main scene I would be in otherwise) -- and I could not be happier.

I'm just glad to have this opportunity, because over the break my parents had the customary holiday "interrogate our daughter on her life and career choices" where my mother accused me of thinking that I'm "too good for" or somehow "above" D.C. and the Shakespeare theatre and universities in this area...or something...I didn't quite understand what they were going on about. They spent half of high school trying to kick me out and now they want me to move back in. It's weird. But I know I wouldn't have this opportunity elsewhere, and now that we are actually in rehearsal, I am EXTREMELY glad and grateful to be where I am.

I'm sound designing for a play at my college. It's a daunting task, since I have never designed sound before. On the other hand, I get to dig into a play that is so rich in sound. Approaching it from a sound designing perspective has made me realize how sound is essential to the play's structure, which is really amazing. If you take the first vignette as pool/stillness with marked and distinct sounds intruding on the quiet/stillness, and then contrast that with the next vignette which is all ocean/gulls/chaos/storm with constant sound and underscoring -- the auditory contrast is just brilliant structurally. I mean, wow.

People who write plays amaze me because of their ability to structure not just based on words but on sounds. They never lose sight of how words sound -- their pitch, syntactical sounds, syllable counts, vowels, consonants, etc. -- because the audience will never read those words; they'll hear them. Their work is meant to be performed. I think that many writers of fiction and even poetry lose sight -- or rather, lose hearing -- of the importance of sound. There's a lesson to be learned from playwriting.